KARAN
Island Hopping Across the Pacific 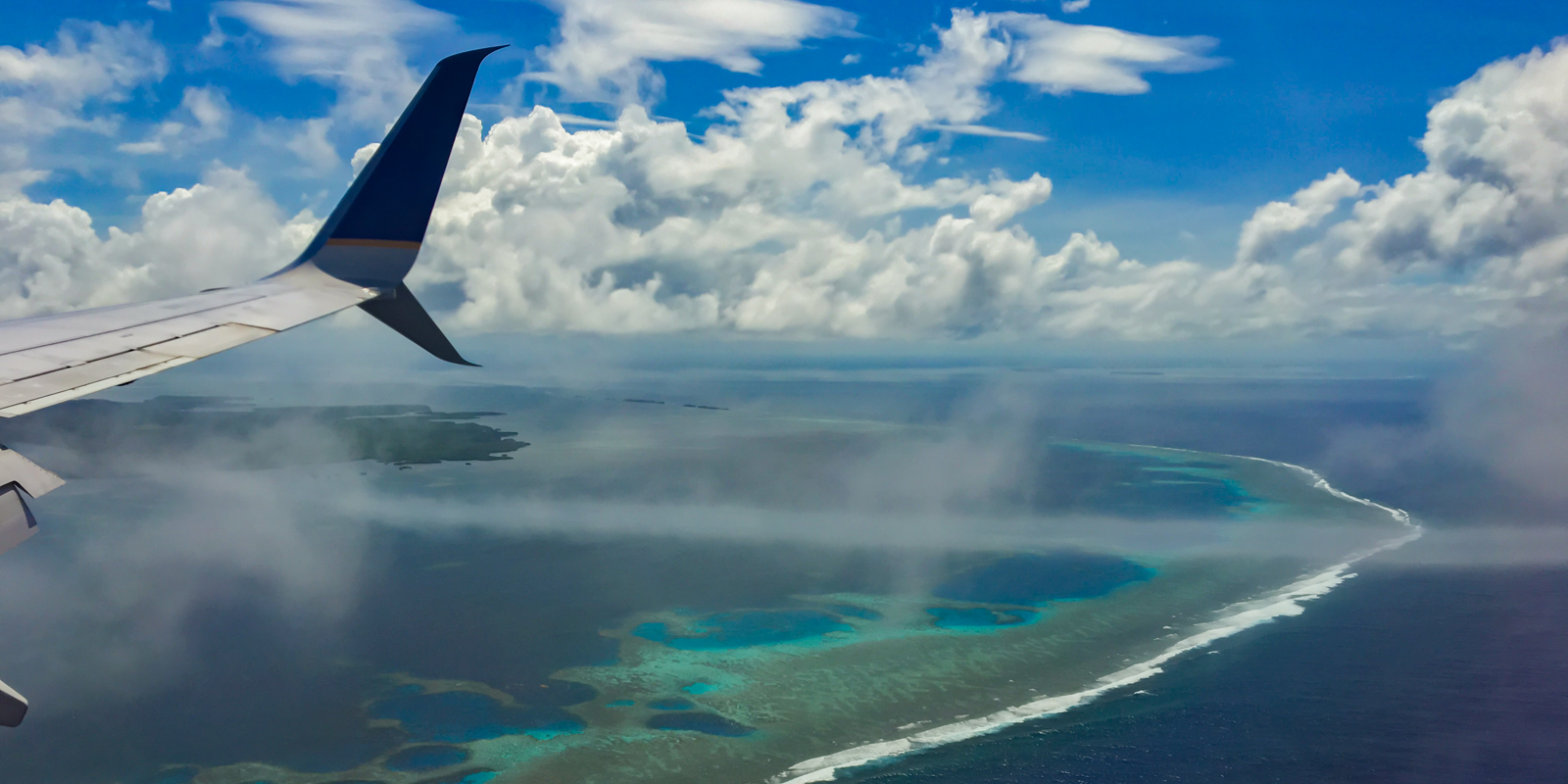 There are two ways to cross the Pacific Ocean by air today- the most common, fastest way is to take a 12-14 hour non-stop flight from an Asian city such as Tokyo or Shanghai to a North American city like San Francisco or Los Angeles, but the little-known alternative is to take a long scenic route across multiple tiny islands, with the highlight being the United Island Hopper- a thrice-a-week flight between Guam and Honolulu making 5 intermediate stops in Micronesia and Marshall Islands.

Why would anyone want to do this? The short answer is- because it exists! The long answer is-

(a) You love sightseeing and visiting offbeat places. You get to see turquiose blue waters, coral reefs, lush green mountains and forests in two exotic countries- Federated States of Micronesia and Republic of Marshall Islands, albeit mainly from the air and at the airport, OR

(b) You love flying and are an aviation geek. The Island Hopper is a flight with unique challenges- short runways, airports with very little facilities, almost non-existent radar coverage, and very long work hours. It is fascinating to see how the pilots and the crew handle these situations

In my case, it was a bit of both of the above, making the island hopper a bucket list item that I got to check off in January 2018 on my way back from India to the US. My itinerary was Mumbai-Tokyo-Guam, stay one night in Guam, Guam-Chuuk-Pohnpei-Kosrae-Kwajalein-Majuro-Honolulu, stay one night in Honolulu, and Honolulu-Oakland (near San Francisco) thereby making it a three-day voyage across the Pacific. 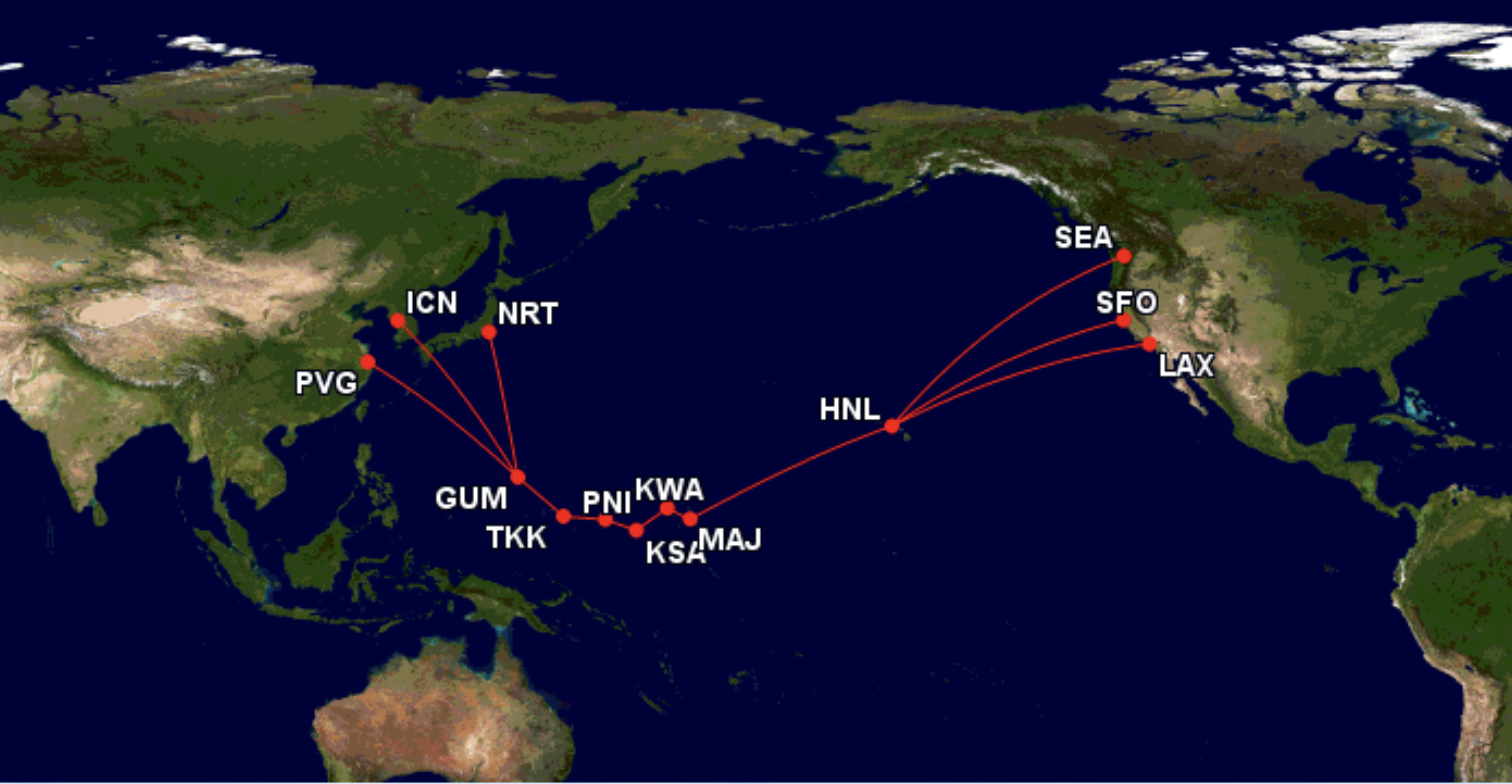 Highlights and interesting tidbits from my journey-

So, is it worth the effort? How are the views? I will let the pictures and videos speak for themselves. If you are here just to read how can you do this journey, click here to skip past the pictures. 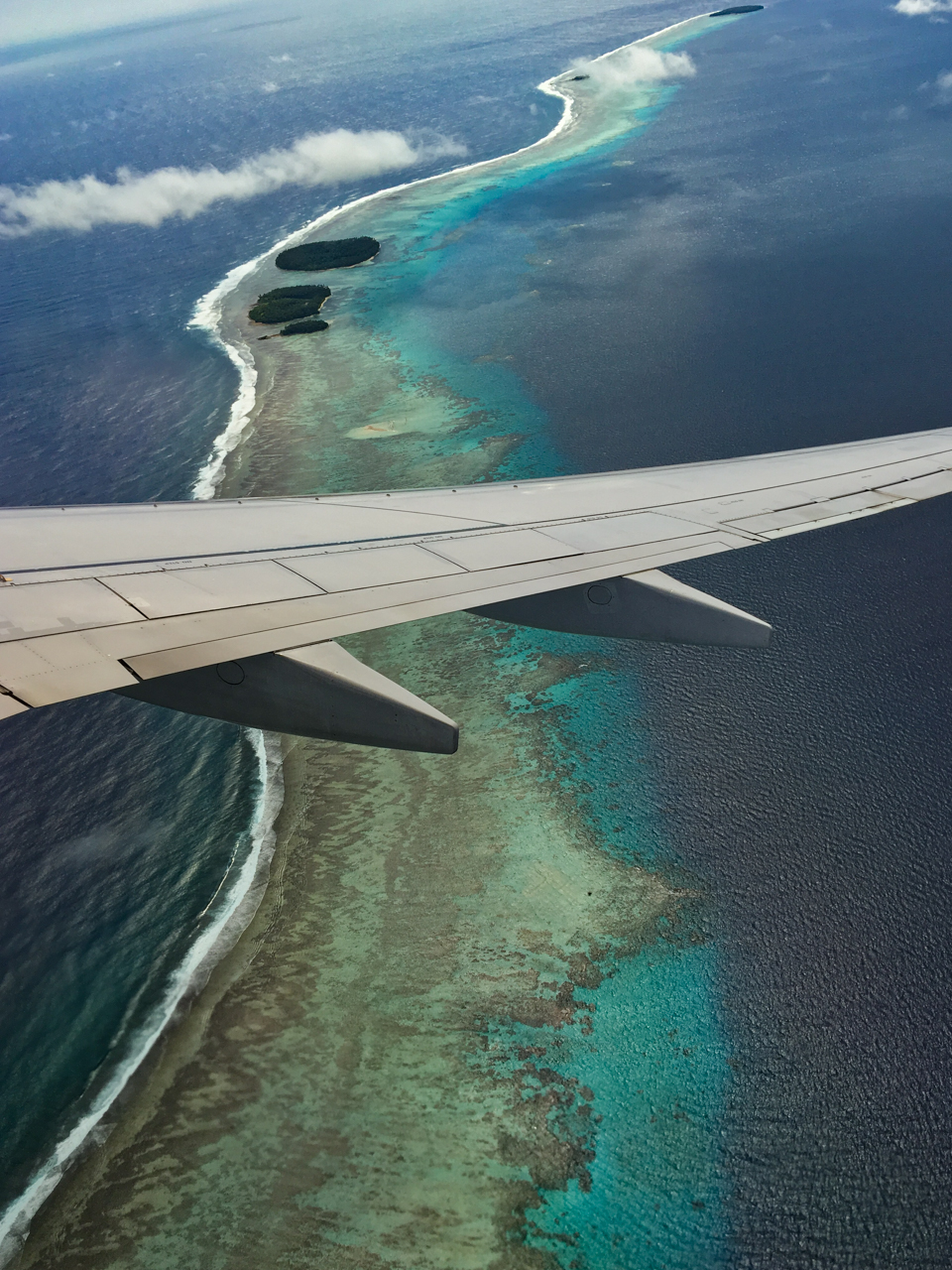 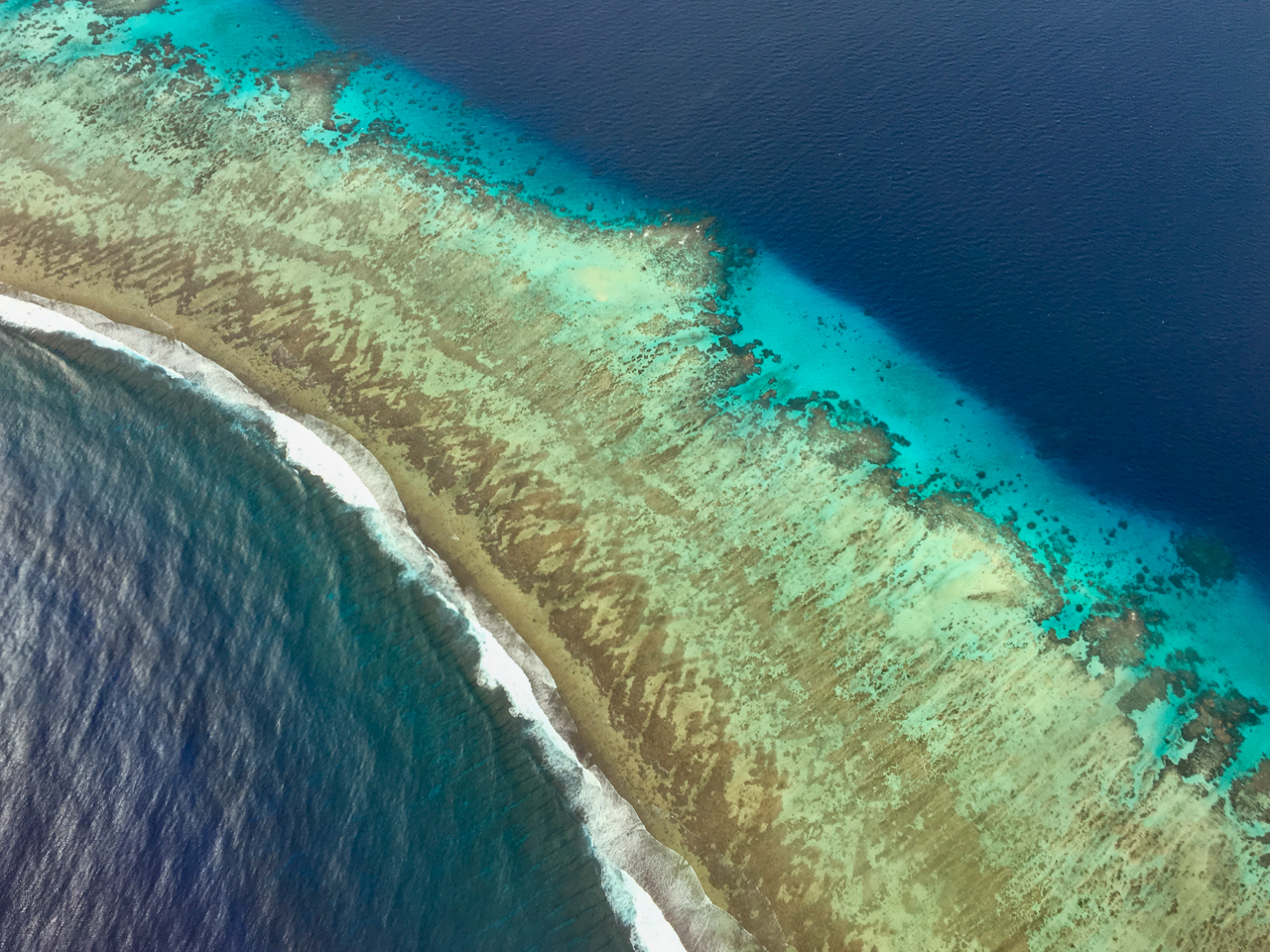 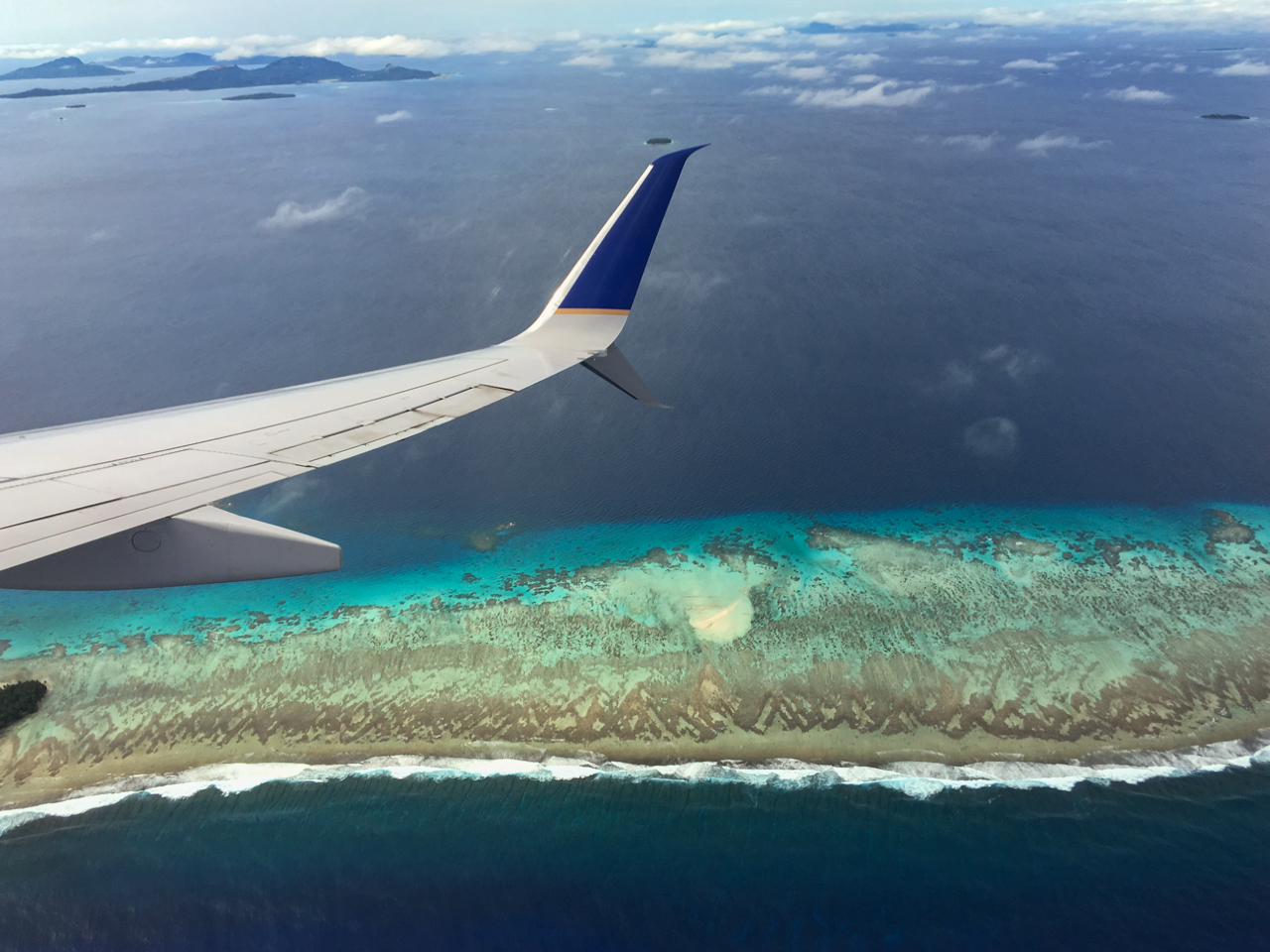 You can tell why Chuuk is famous for reef diving. 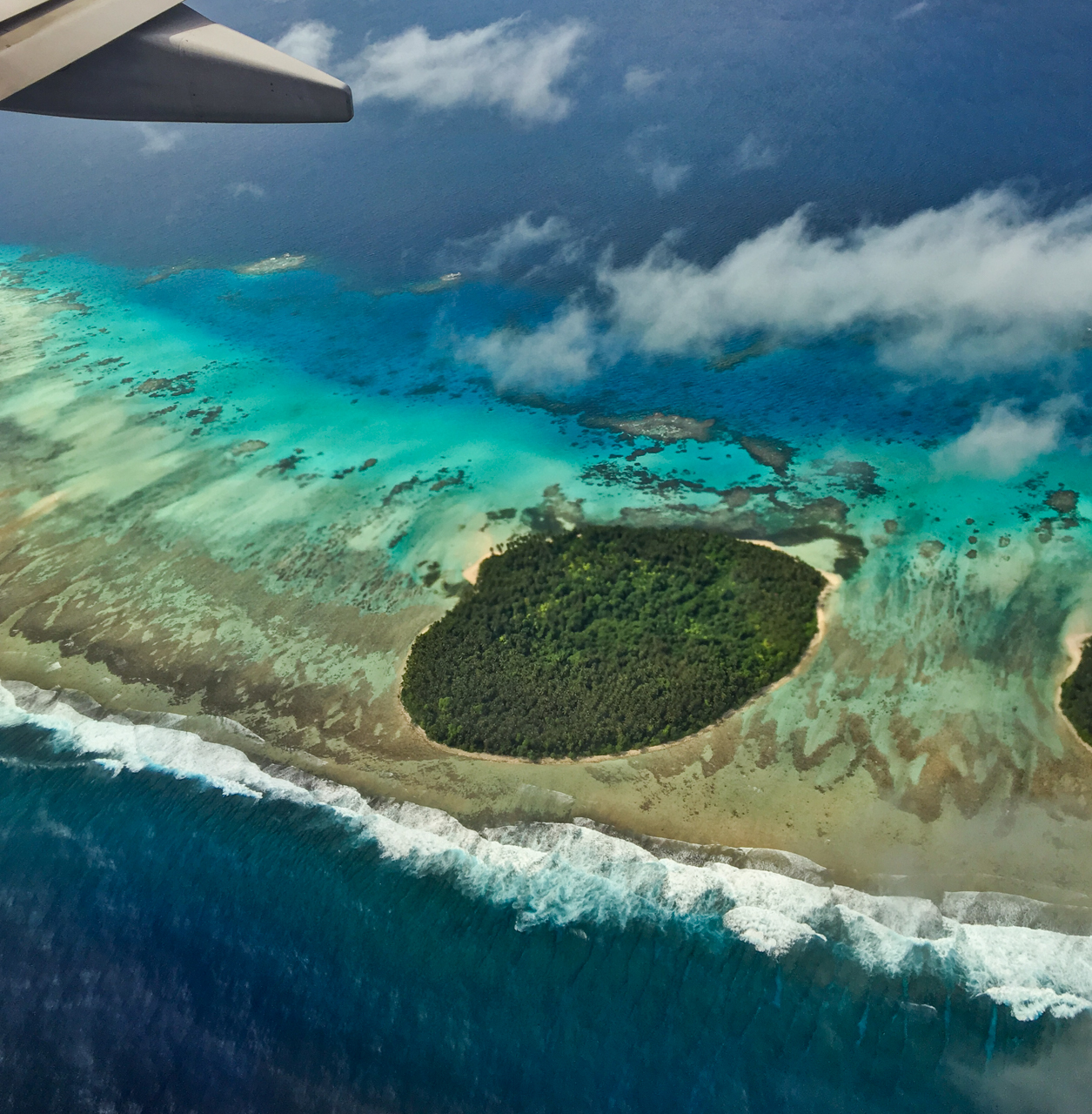 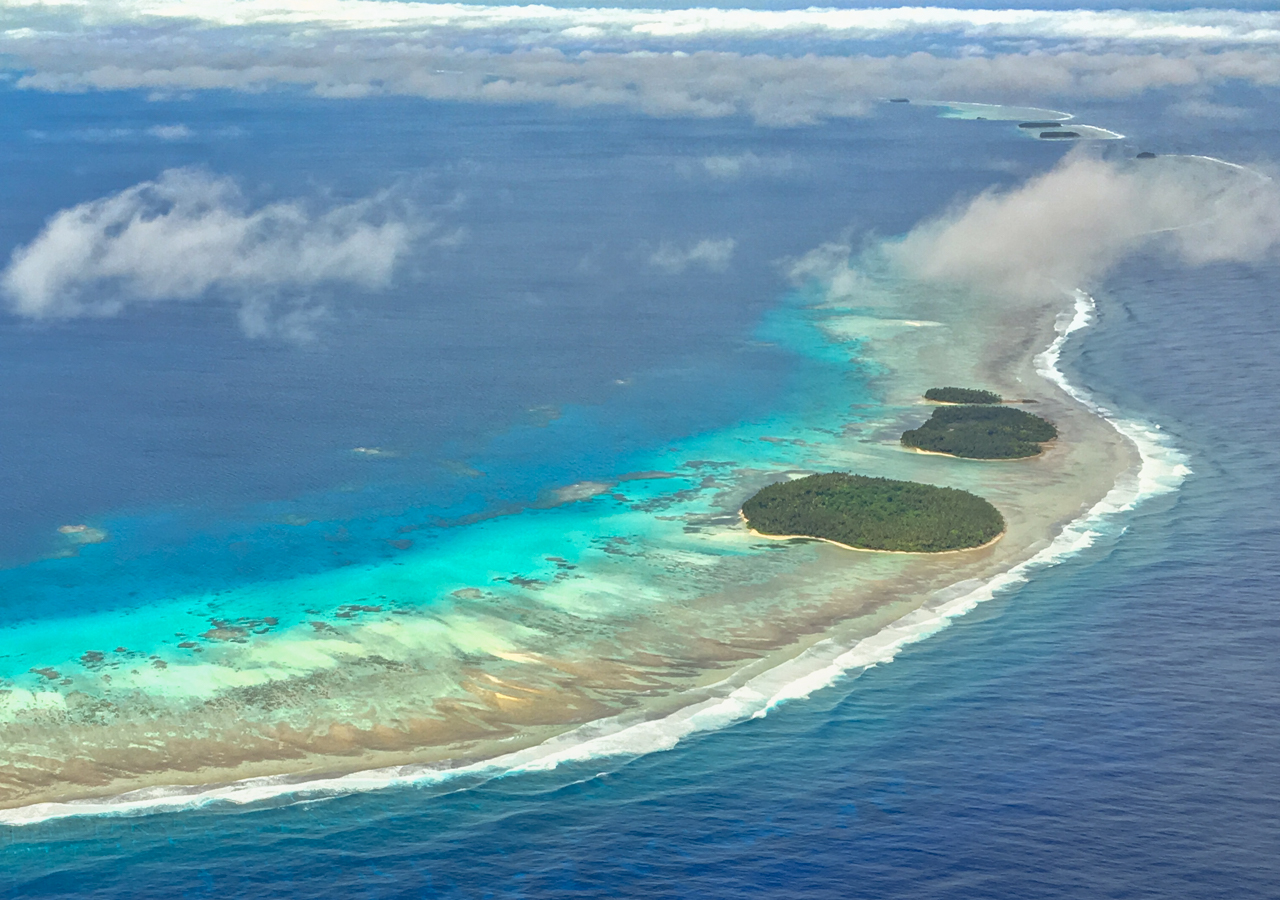 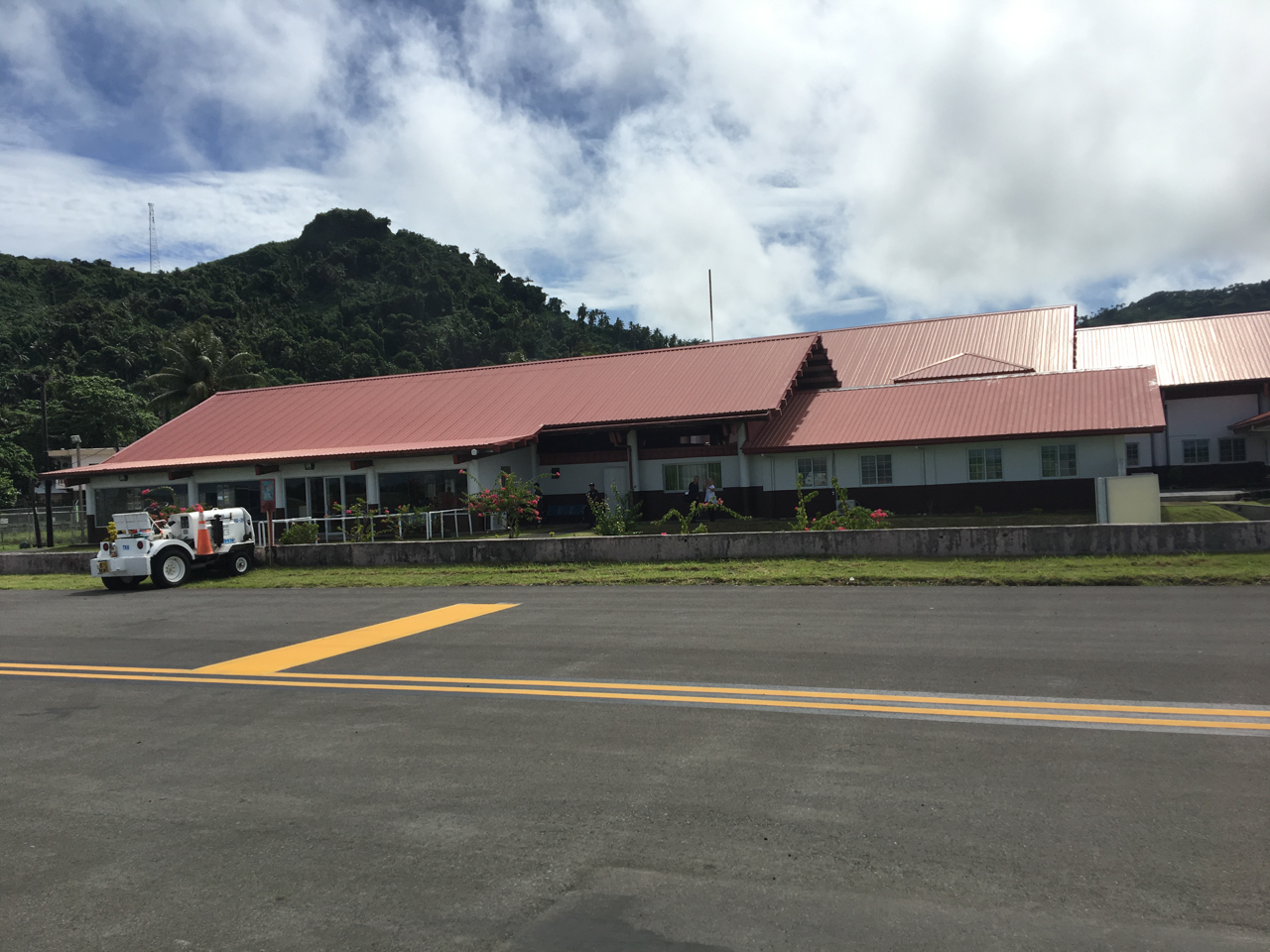 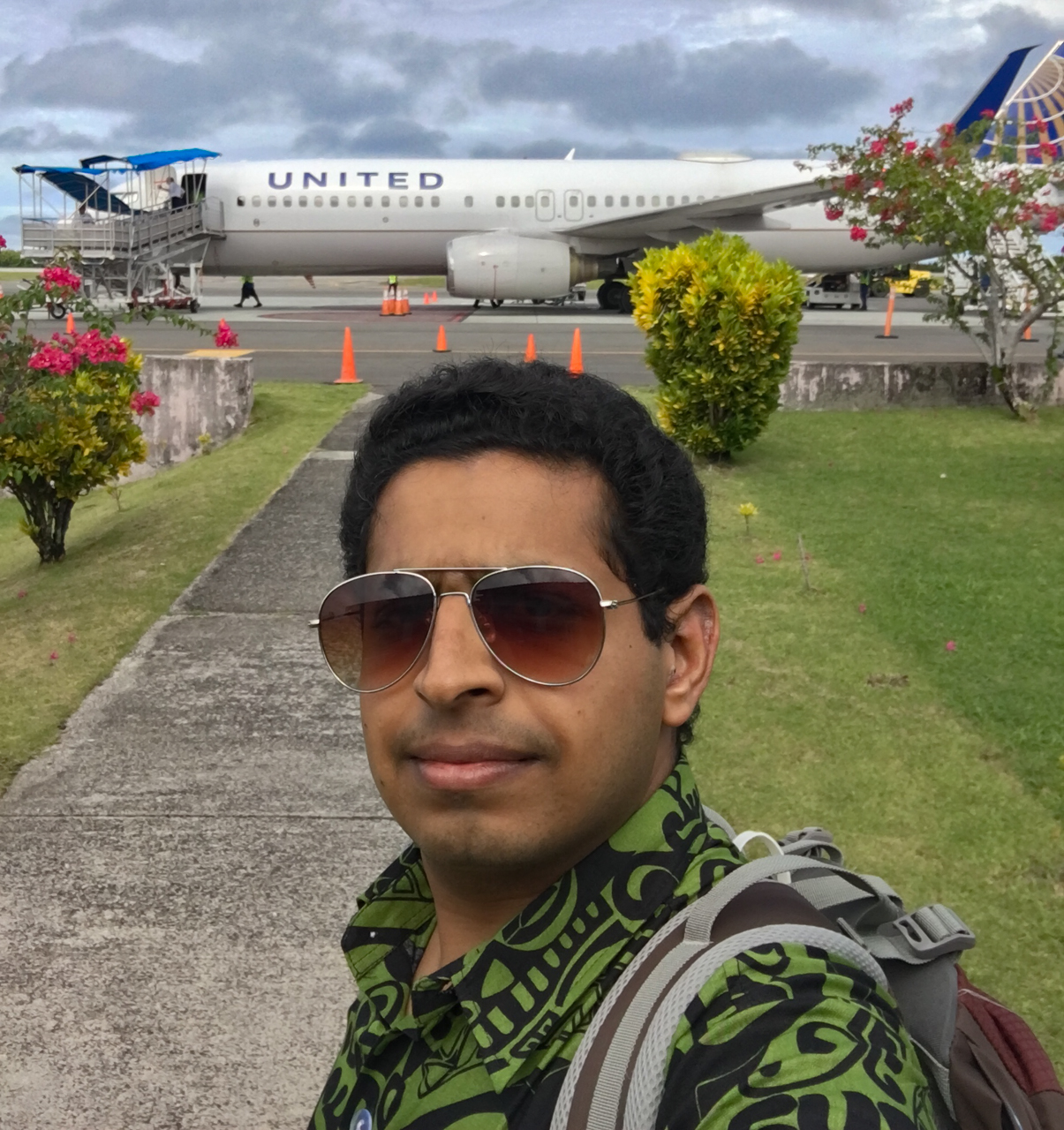 I was here. Hello from Federated States of Micronesia! 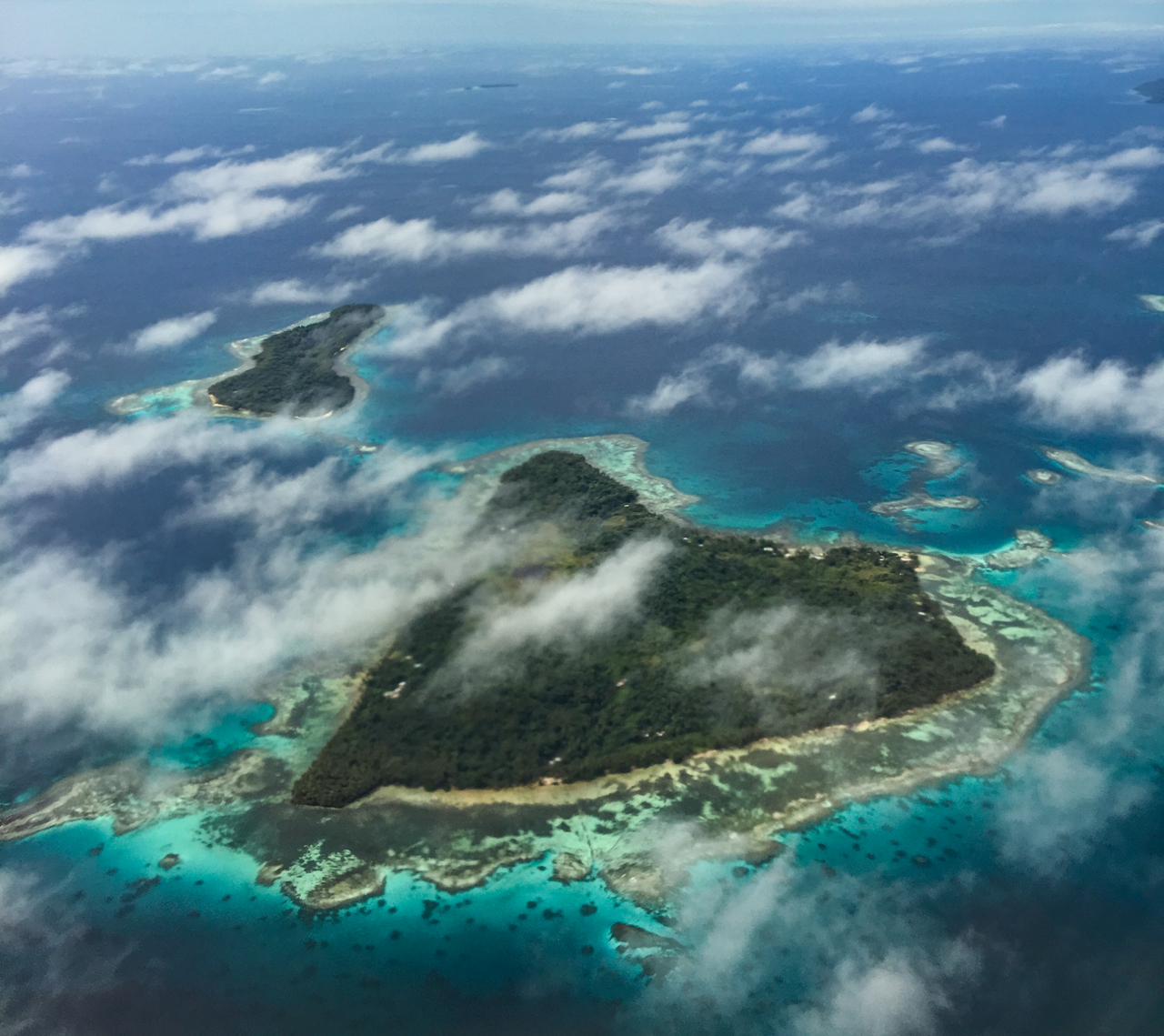 There are supposed to be shipwrecks around here from WW2. 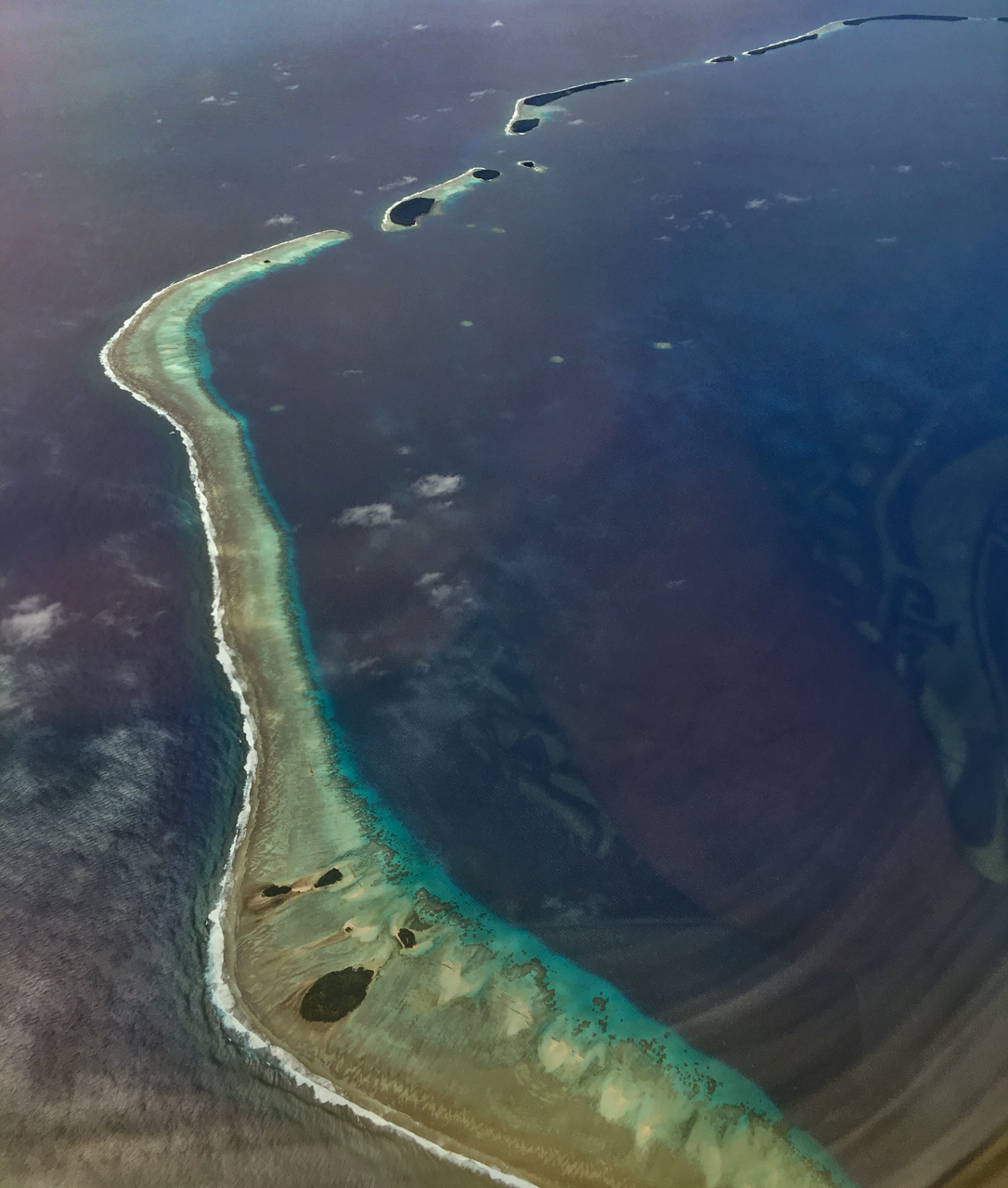 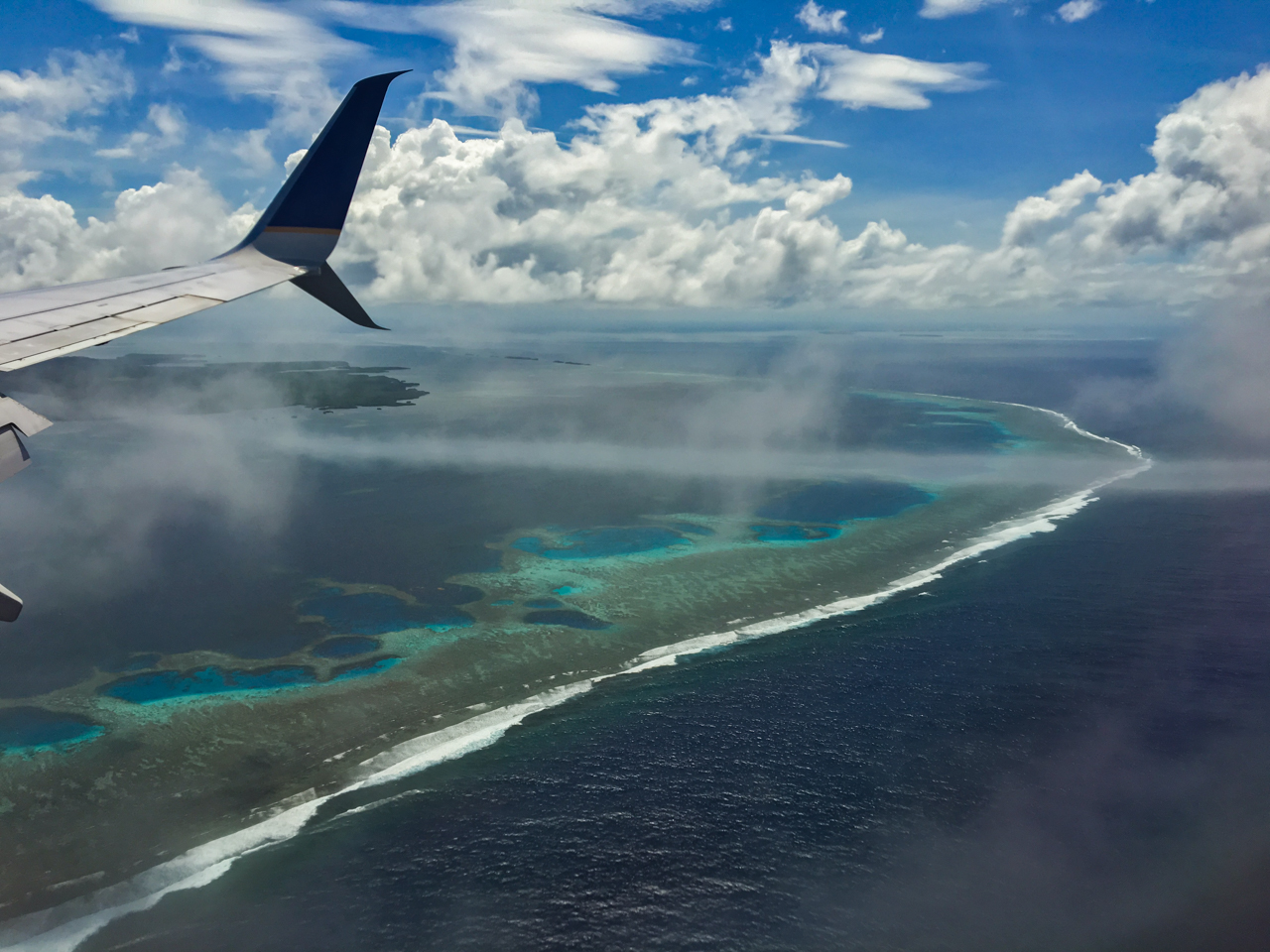 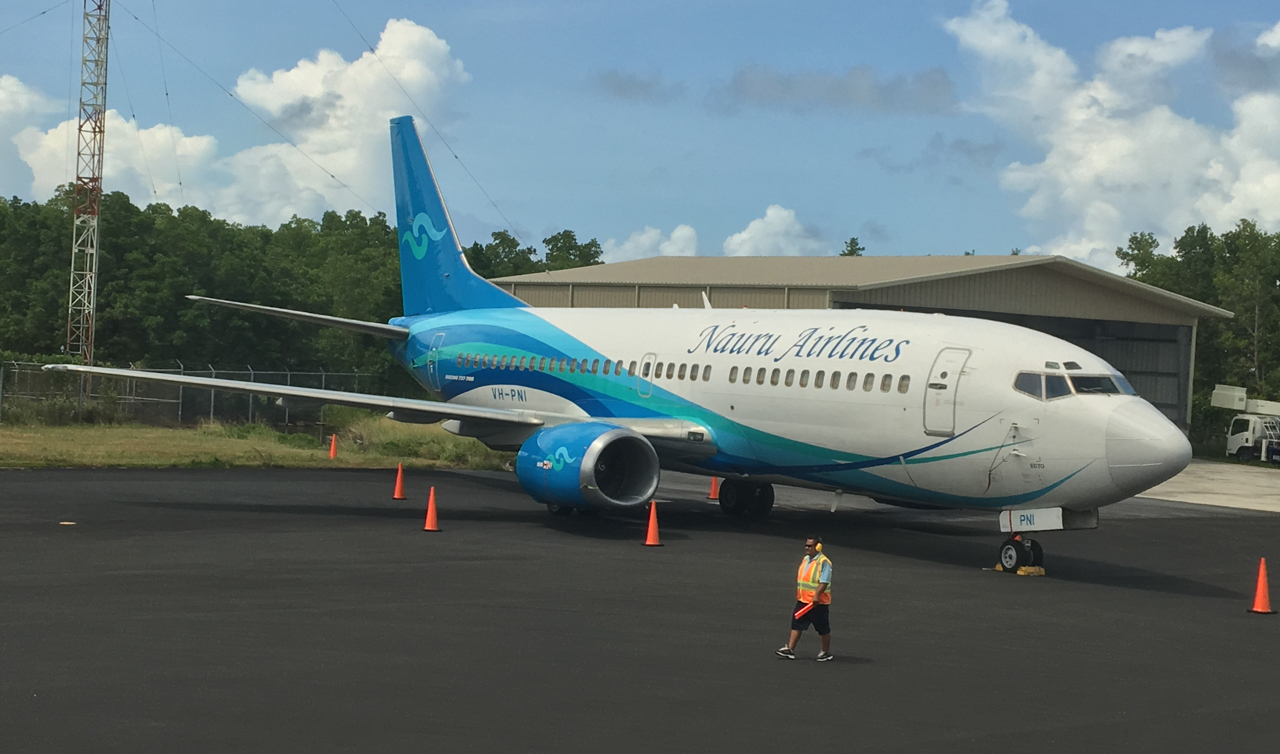 At these remote islands, you meet airlines you've never heard of. 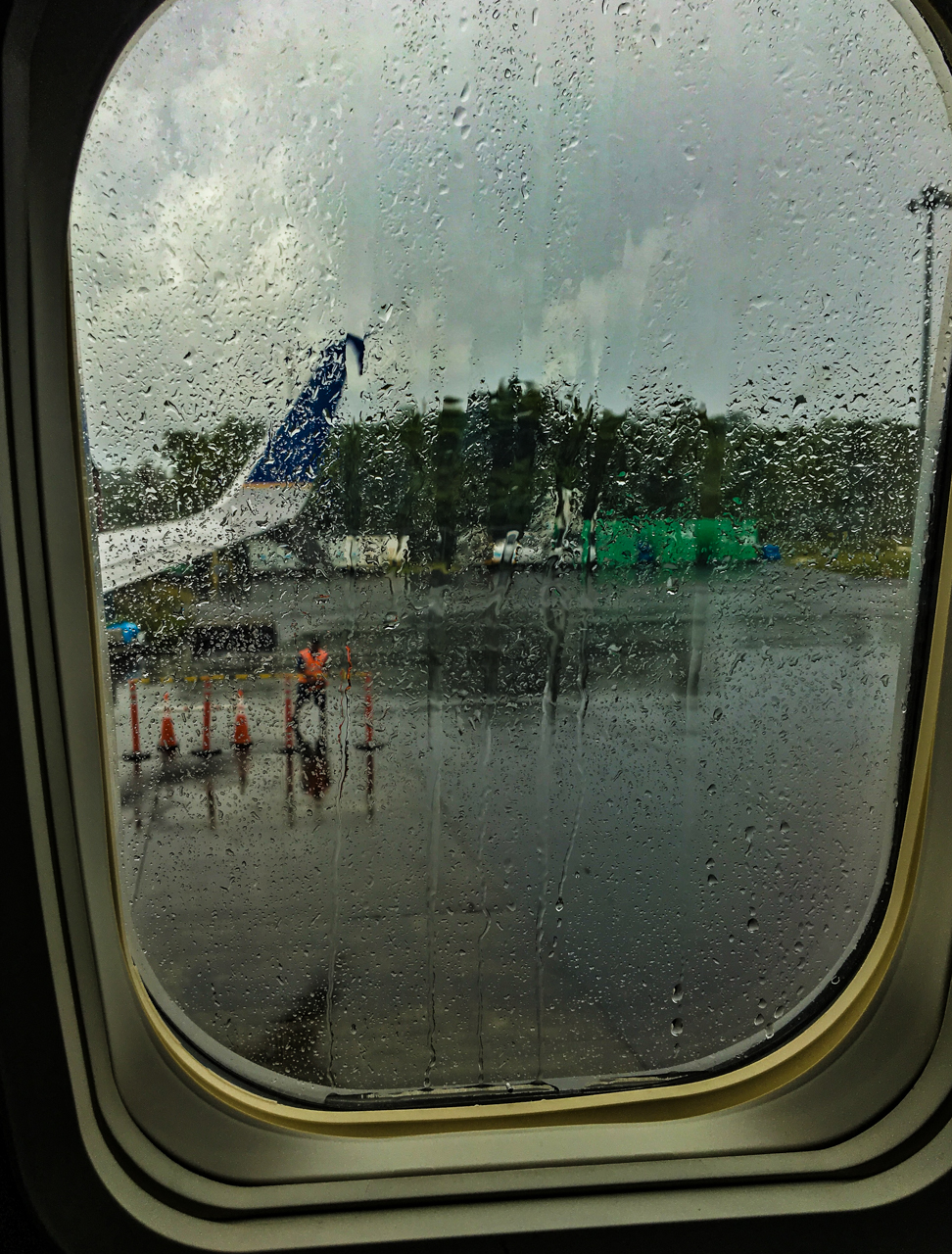 Pohnpei greeted us with a sudden rainstorm. 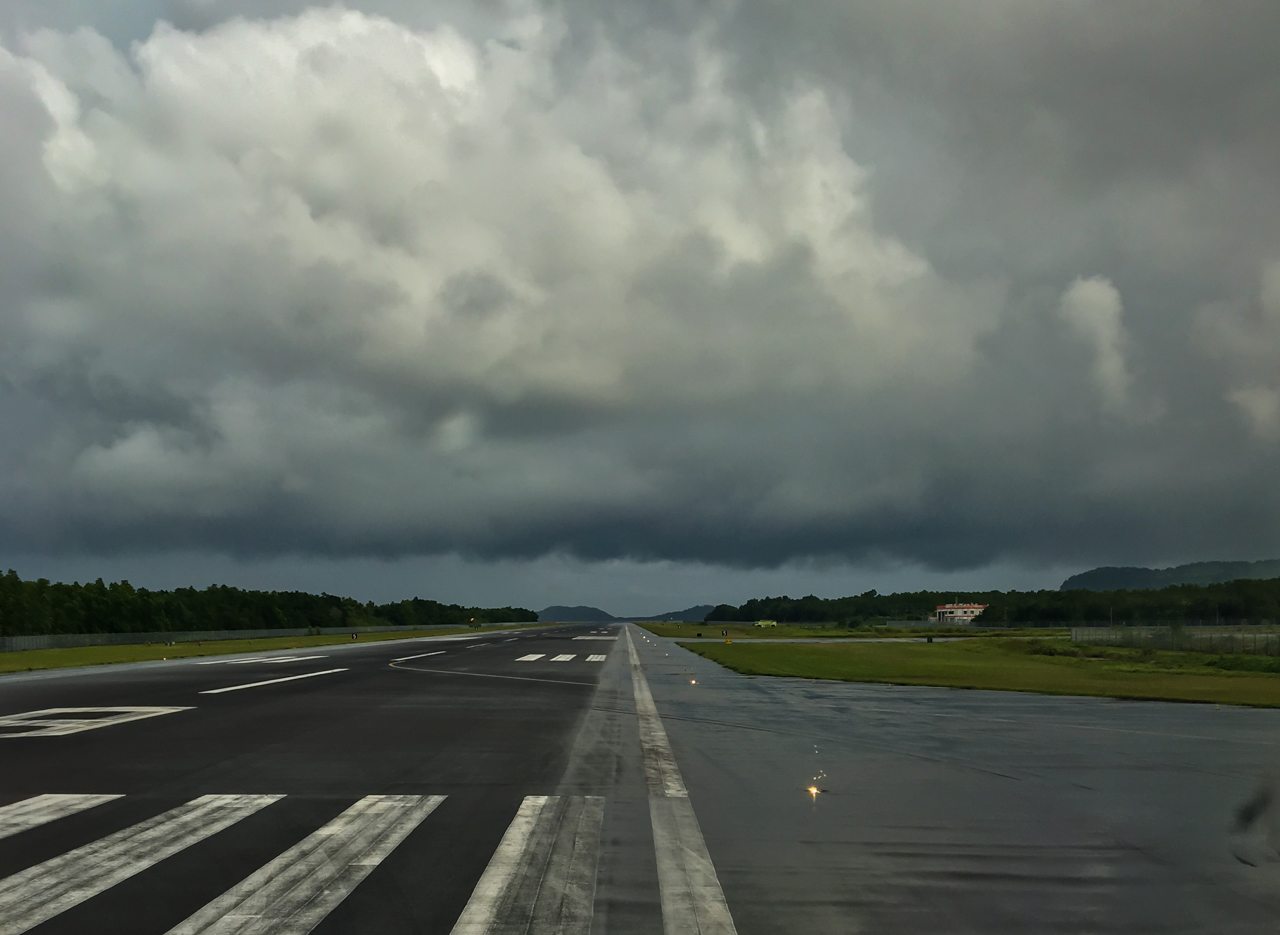 Ready to takeoff from Pohnpei into the storm clouds. 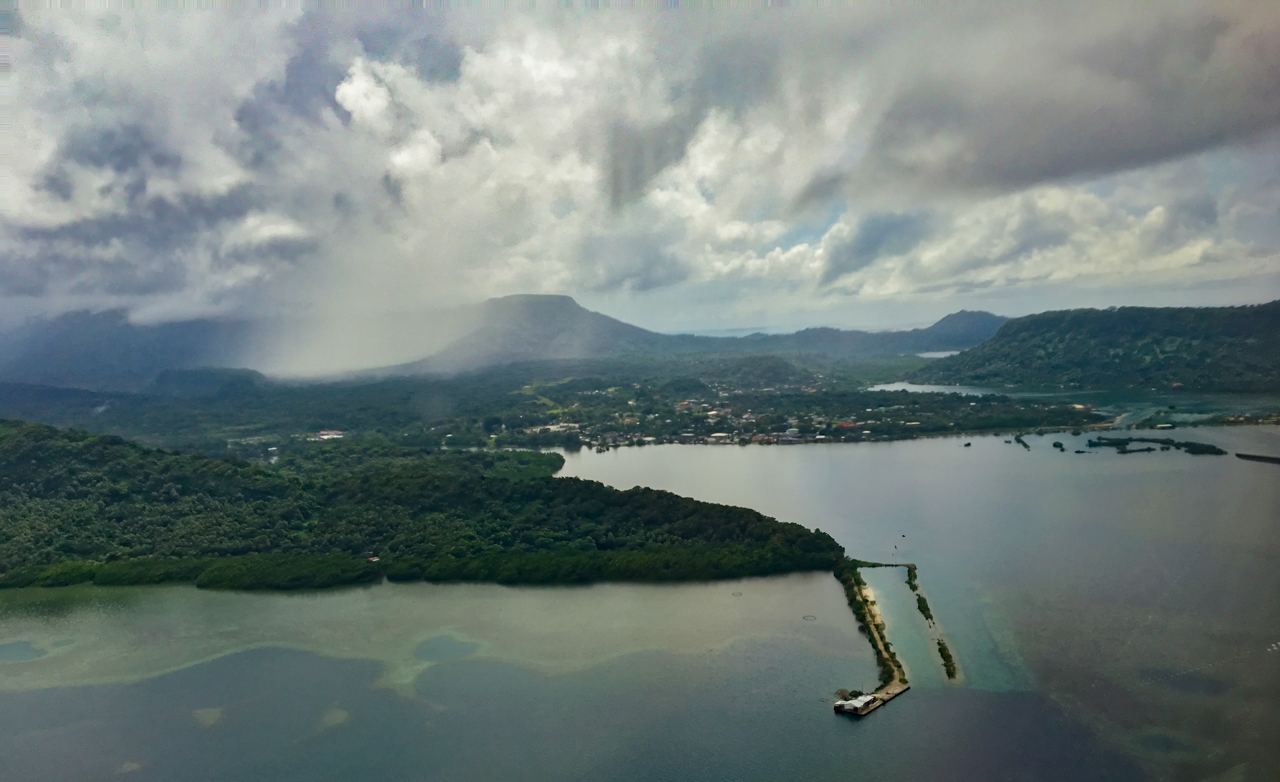 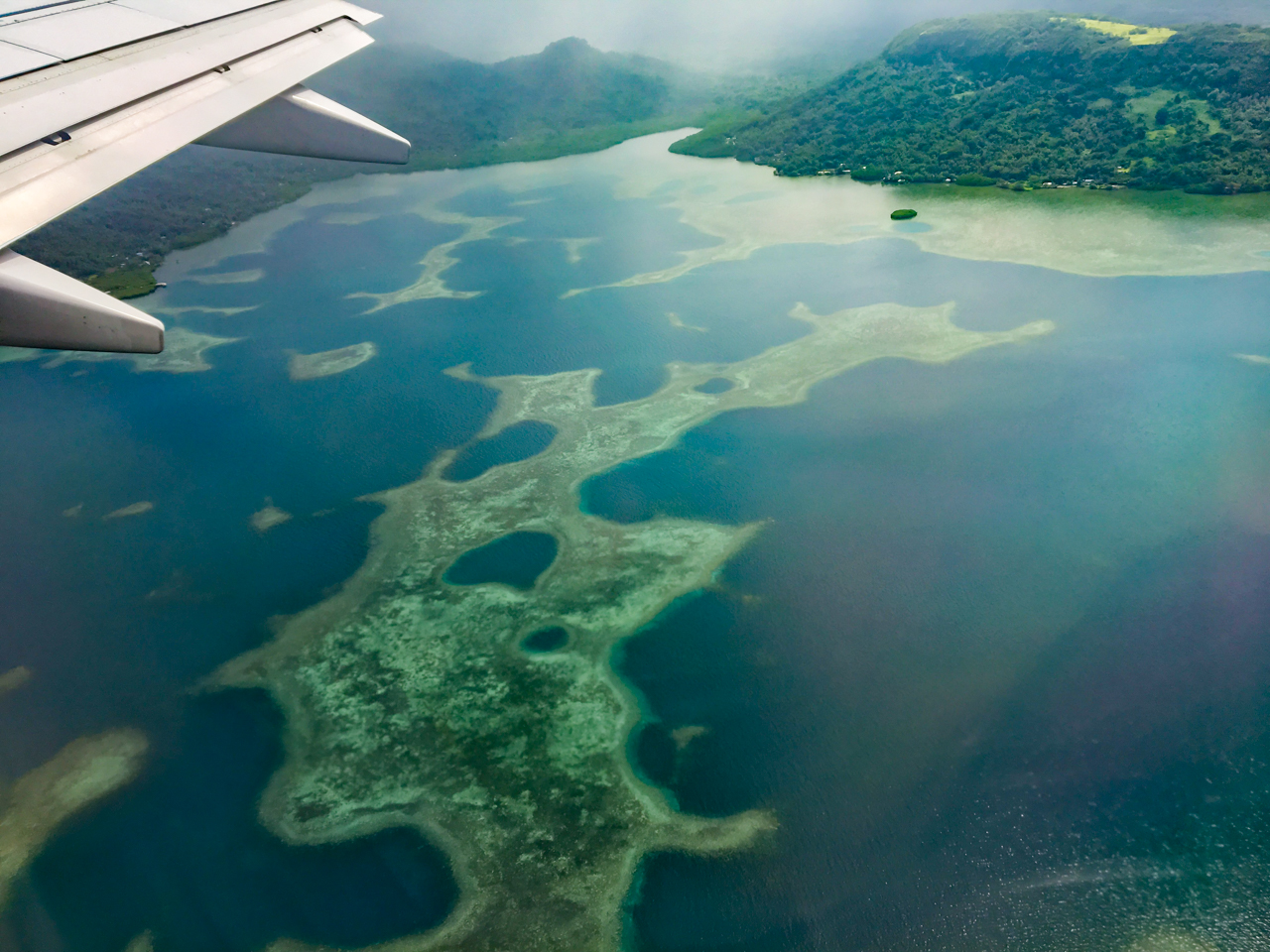 What's that shapes yo? 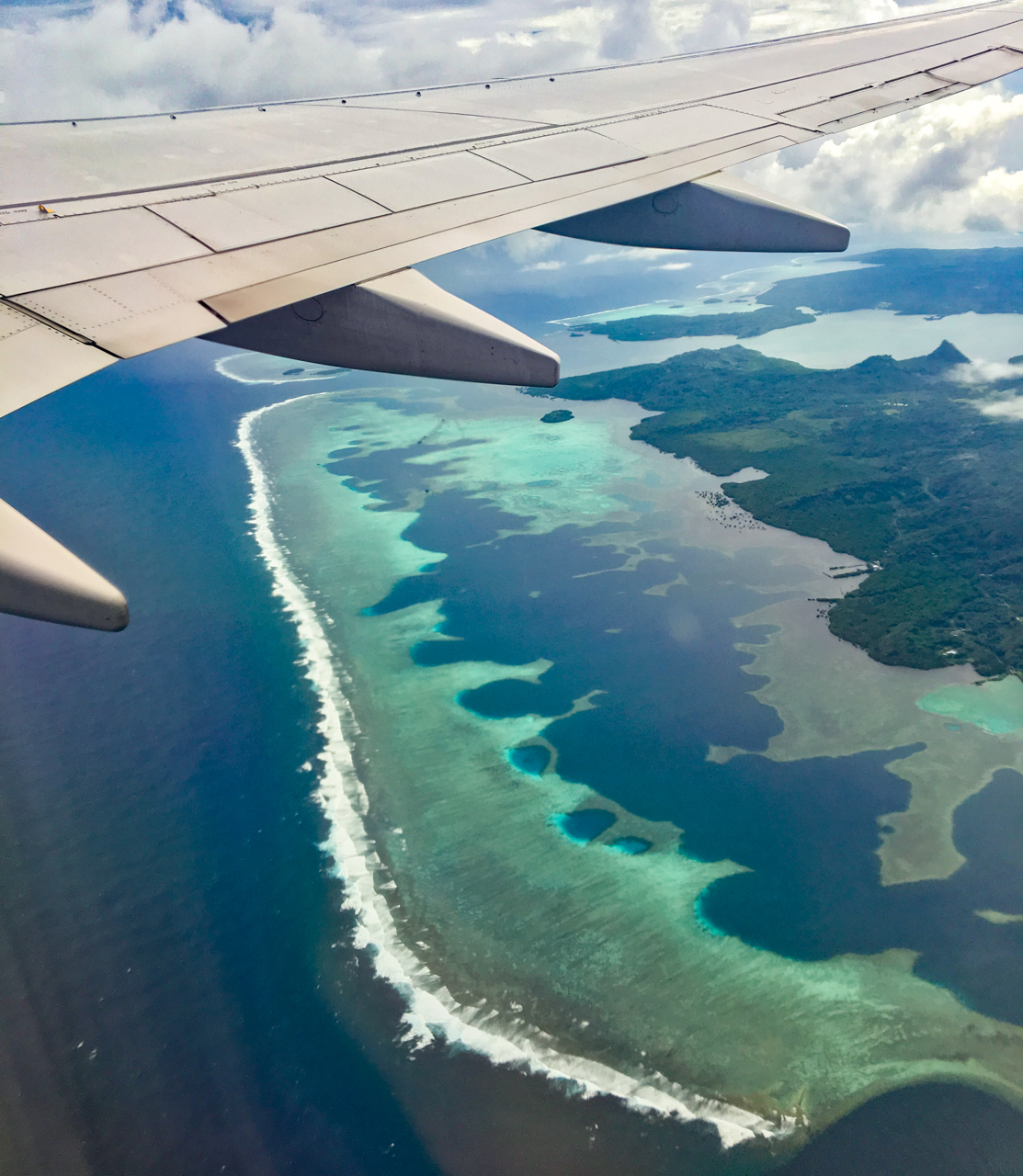 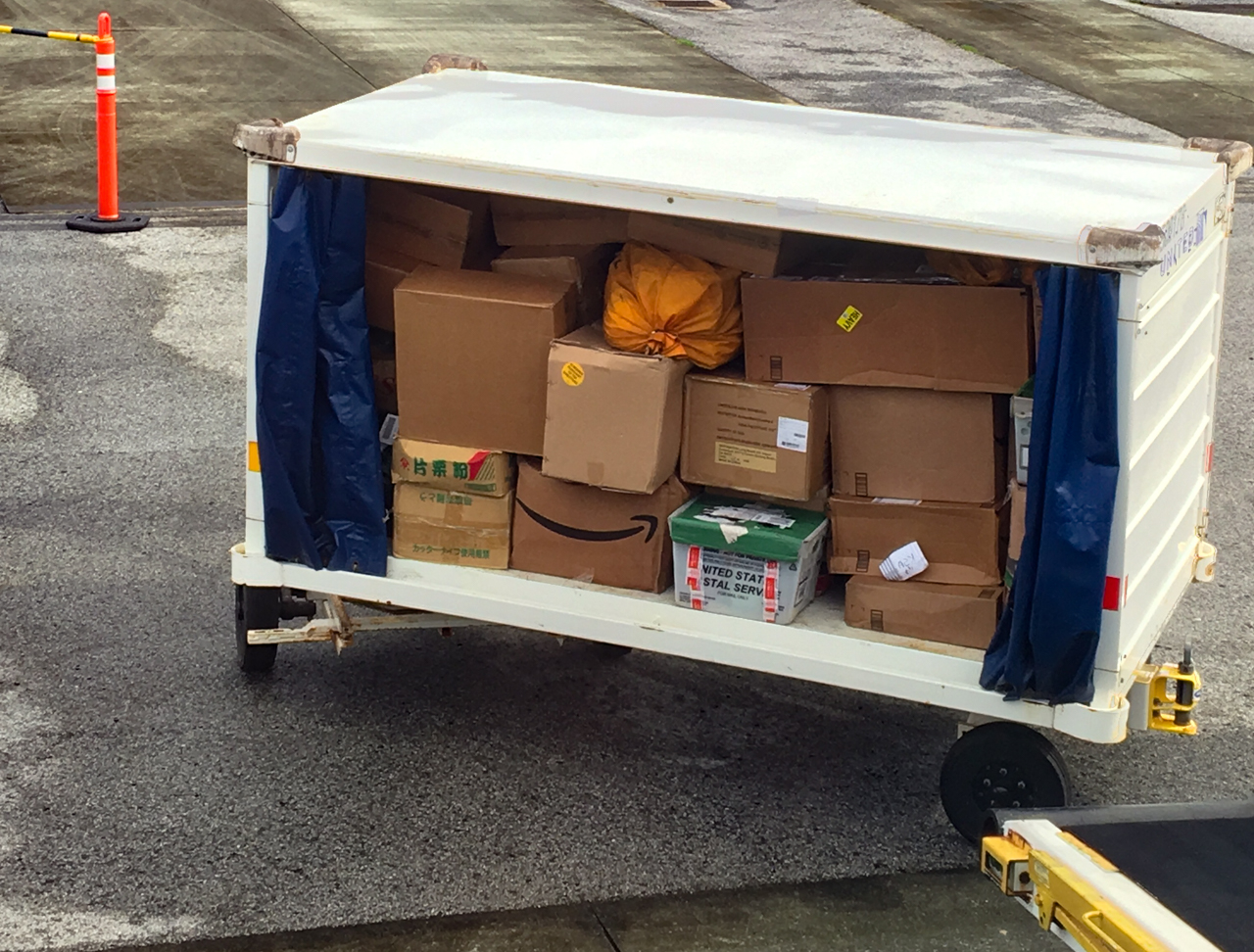 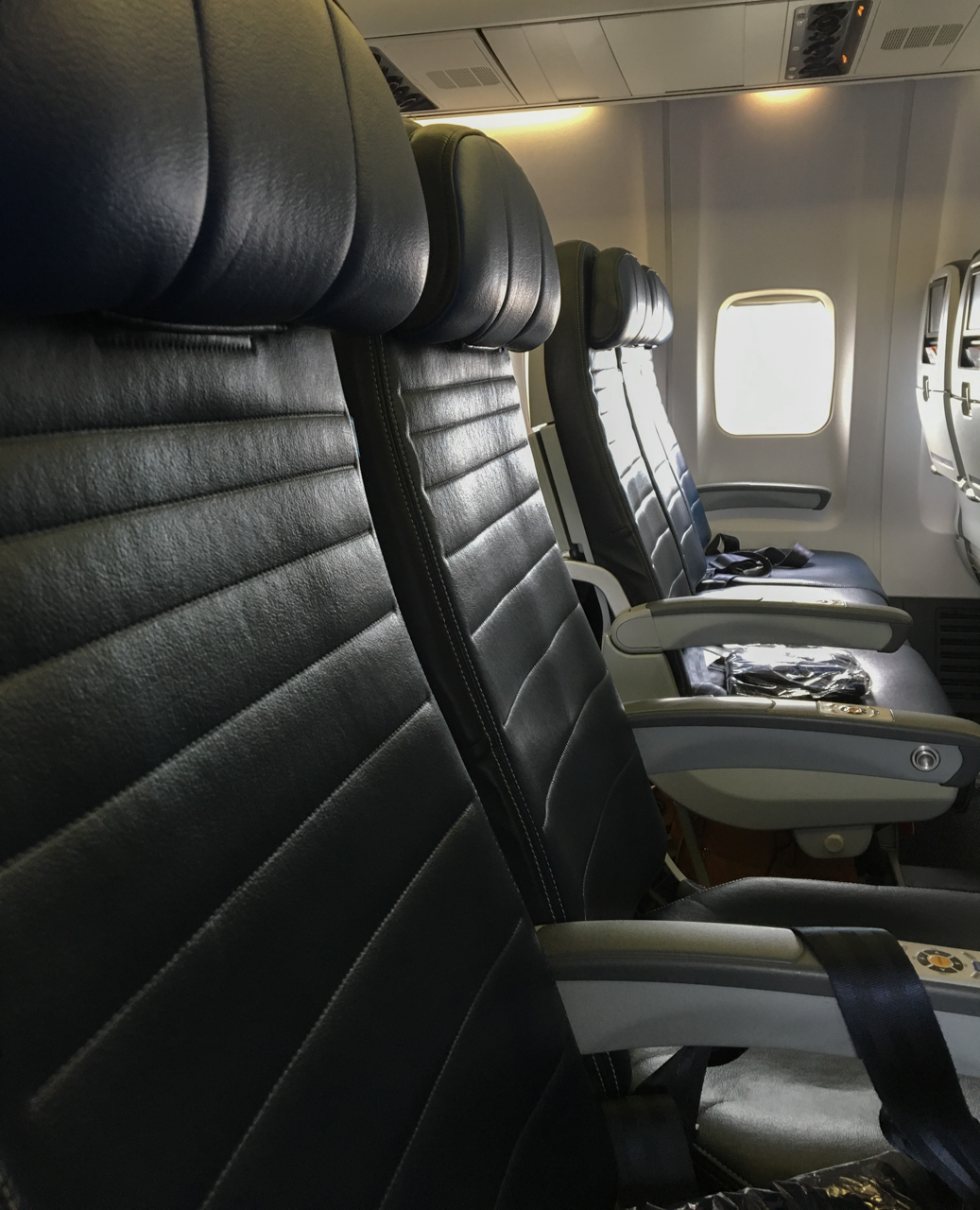 Some legs you get lucky with an entire empty row to sprawl out. 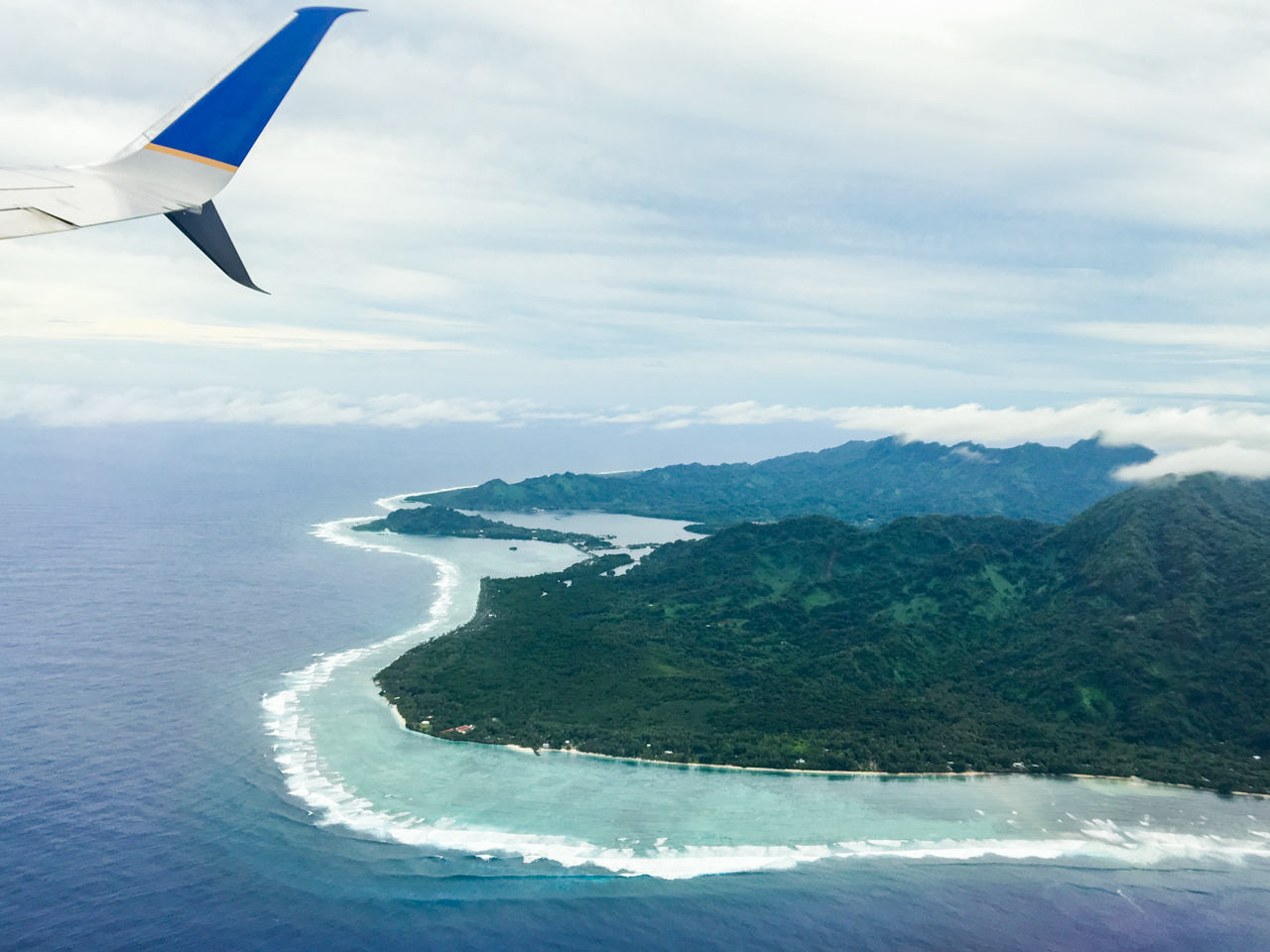 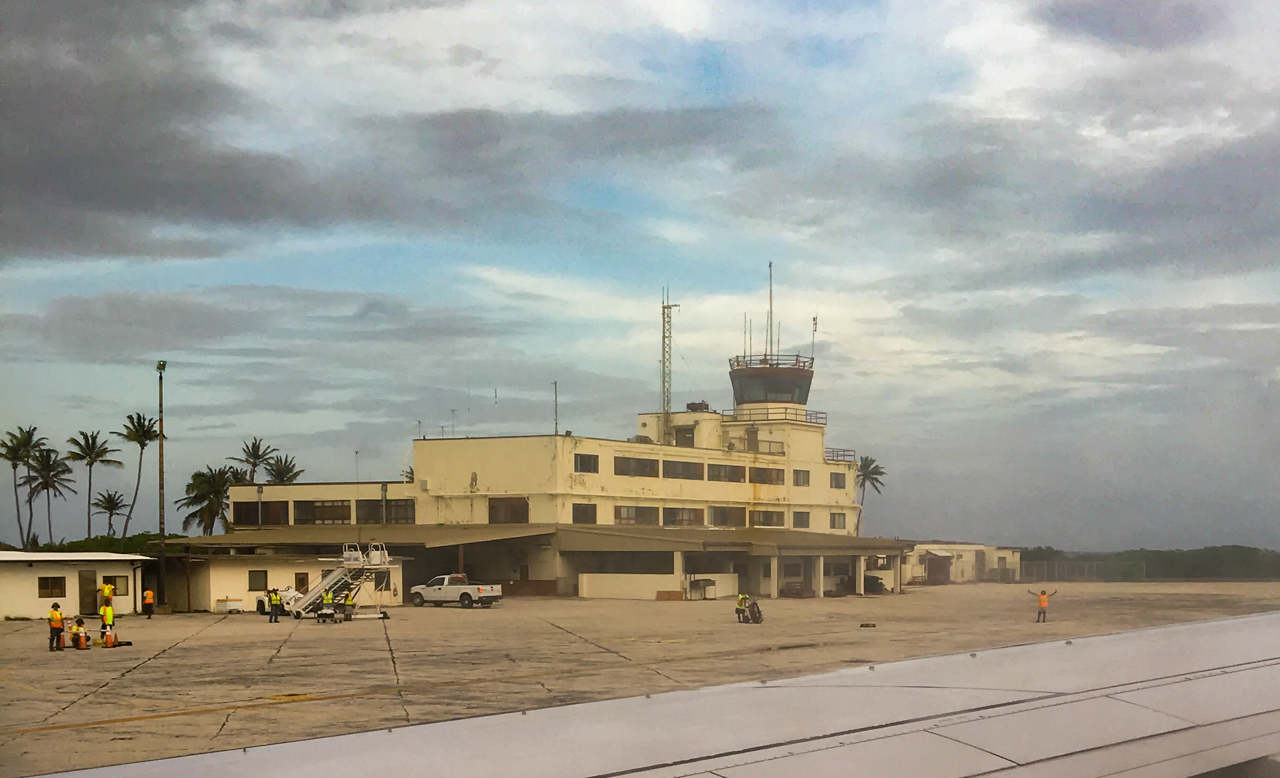 Kwajalein being an active military base, photography is not encouraged. I got this one though.

And this too. Military equipment dotting the runway in Kwajalein. 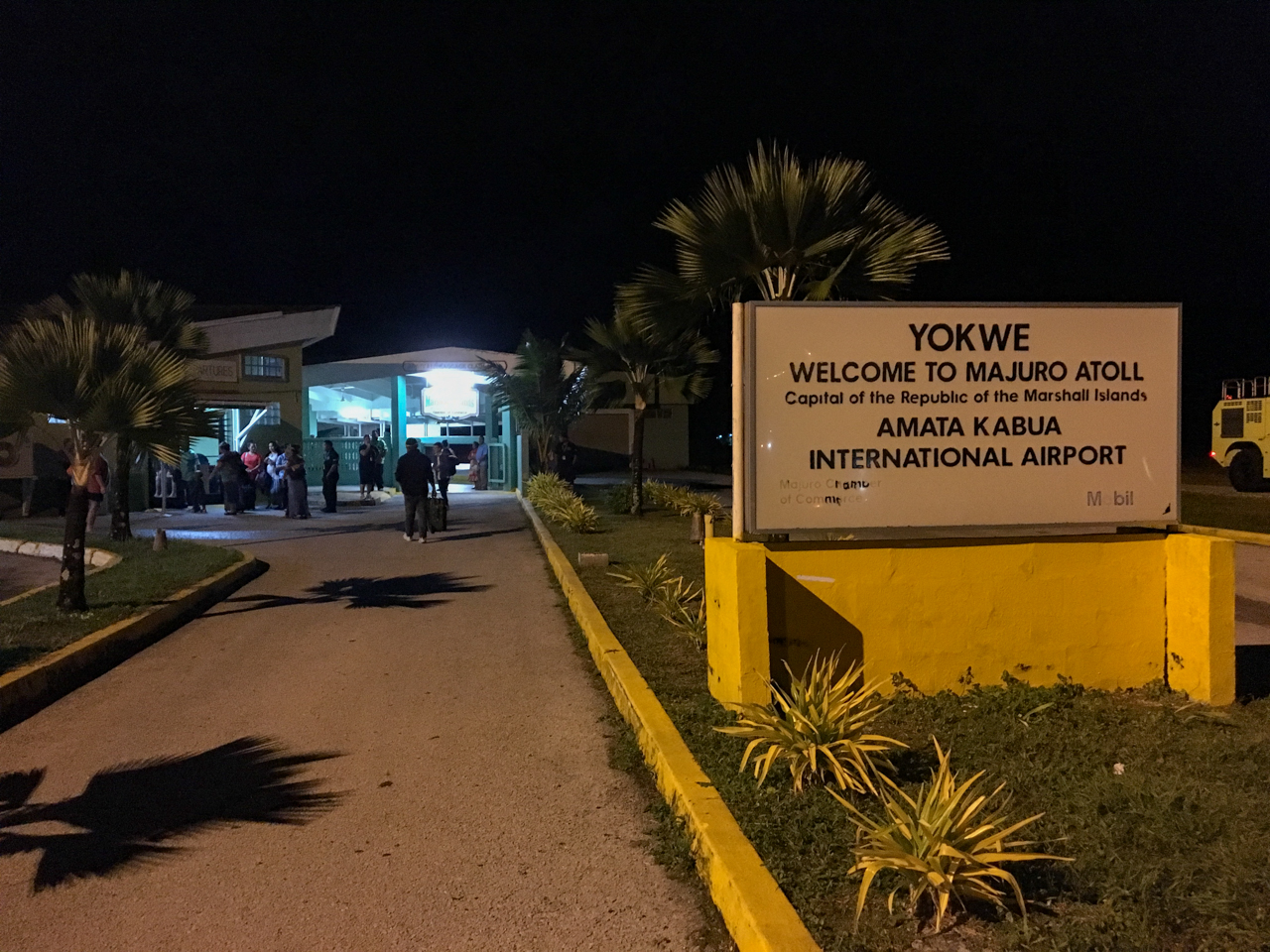 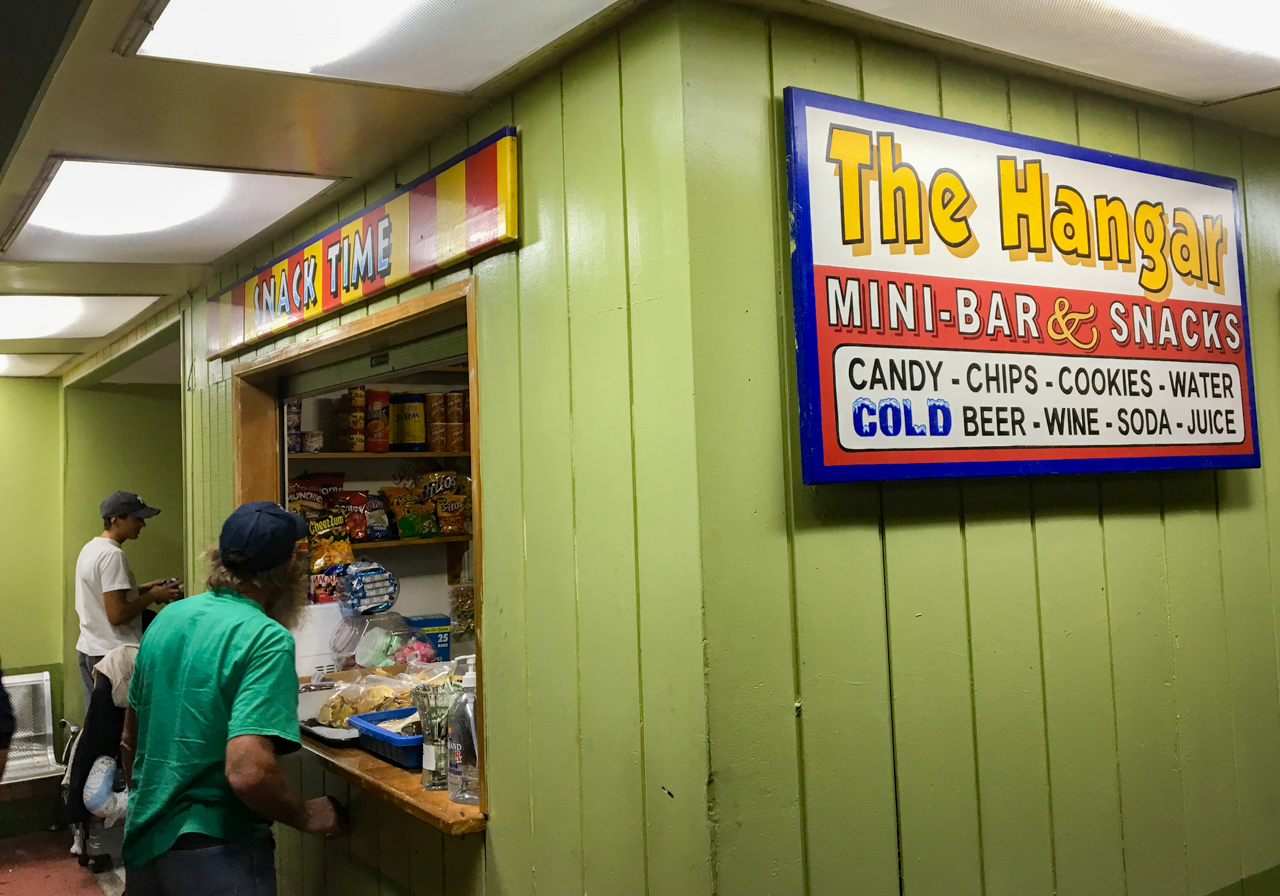 Food! Majuro airport has a stall that does roaring business for exactly one hour a day. 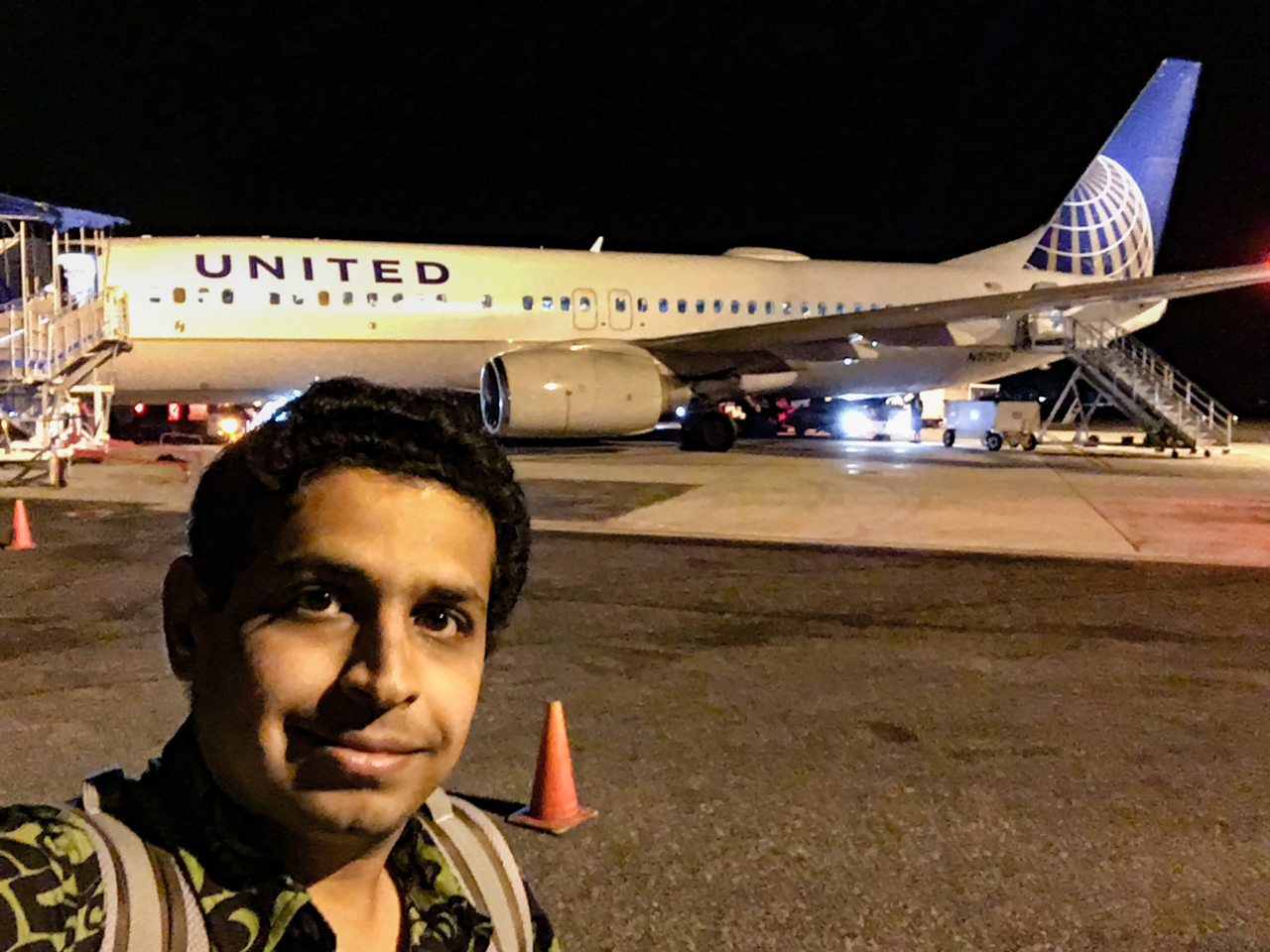 Fin. Time to sleep it out to Honolulu.

The most beautiful sights are just before landing and just after takeoff from every island. Still images can't capture all of it, so I took videos of every landing and takeoff (except the one in Majuro which was in darkness). The best views were while climbing out of Kosrae, seen here-

You can watch all the other takeoffs and landings on this YouTube playlist.

I want to do this! How to book?

The easiest way to do this journey is using United miles. You will need 60,000 United miles. How to get those if you are not a frequent United flier? If you are in the US, Chase Ultimate Rewards points that you earn from Chase Sapphire Reserve or Preferred credit cards can be transferred 1:1 to United MileagePlus miles, as explained here. If you are a few points short of 60K, you can purchase miles from United, but they are not cheap.

Before you transfer or buy miles, make sure the itinerary is available on the dates you wish to travel. If there is one thing United does really well, it is searching for Award travel. Go to united.com and book this trip as a Multi-city itinerary using miles with three legs- 1) your origin city to Guam, 2) Guam to Honolulu, and 3) Honolulu to your destination city. Start with the 2nd leg first since it is the most critical part, for the other two legs you have multiple options.

Step 1: Guam-Honolulu. 27.5K miles - One of the results you will see when you search for Guam to Honolulu flights will be UA 155 with 5 stops if you pick the right days of the week (the Island Hopper skips 1 or 2 islands on some days, make sure you choose a day when it shows 5 stops, not 3 or 4 stops). Also, there are non-stop flights between Guam and Honolulu which skip all the intermediate islands, make sure you are NOT choosing that one by mistake! 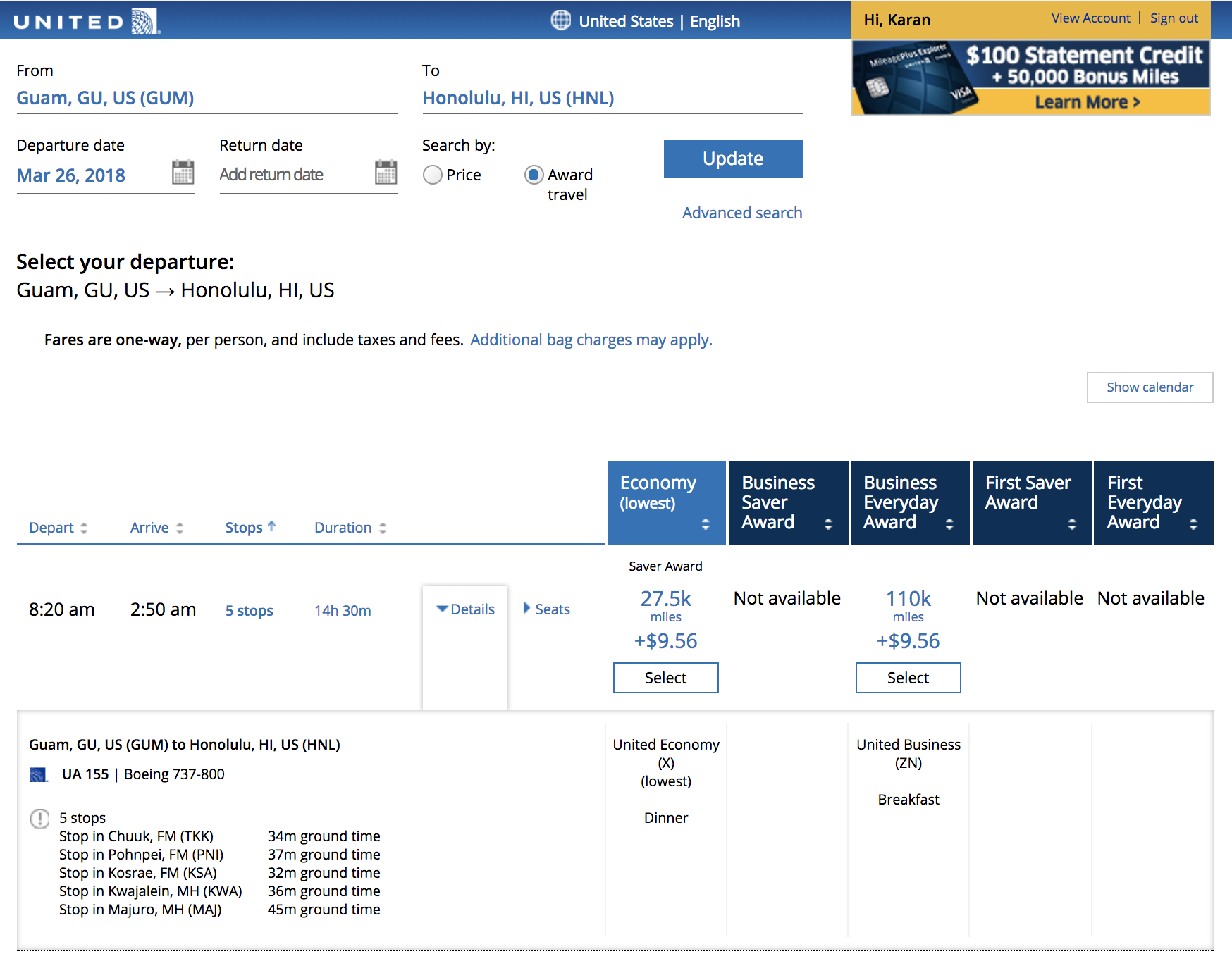 Step 2: Origin-Guam (Mumbai/Delhi-Guam is 32.5K miles) - There are multiple options available for this part, choose the one that works for you. I flew Mumbai-Narita-Guam on ANA and United, this is a great flight if you can snag it for 32.5K miles, it is not always available. From Delhi, a good option is via Shanghai on Air India. Be very careful about dates, you do not want to arrive in Guam AFTER your next flight has departed! 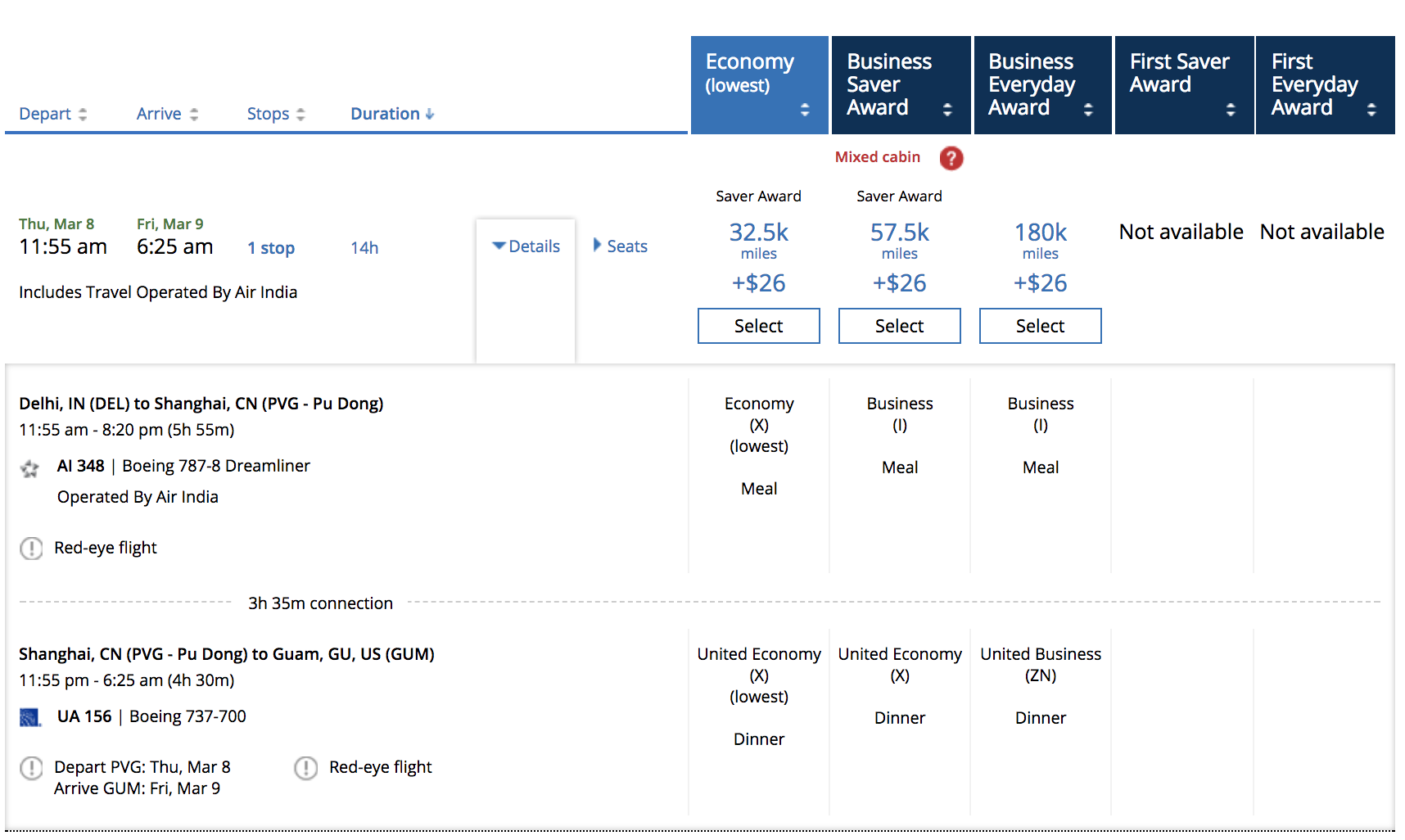 Step 3: Honolulu-Destination - Before booking this, hold on! Honolulu to US West Coast is a very popular route with multiple airlines, so you can sometimes get a better deal outside rather than booking on United (also, get to fly on a better airline than United!). For example, Honolulu-Bay Area flights are often as low as $169, so don't waste your United miles on that leg. Of course, if you have a ton of United miles, you can redeem 25K miles for a Hawaii-US mainland ticket instead of paying cash.

Ready to book? Some tips and warnings before you take the plunge-

If all of this does not deter you, congratulations! You are ready to go island hopping! Do it, it will be an experience of a lifetime!